Getinge has announced the opening of a new modern hybrid operating room (OR) at its Experience Center in Rastatt, Germany. The Hybrid OR, a press release reports, is a surgical theatre equipped with advanced medical imaging devices that enables intraoperative 2D and 3D imaging during minimally-invasive surgery.

According to the press release, the new hybrid OR is equipped with a combination of the new ARTIS pheno robotic C-arm from Siemens Healthineers, the Maquet Magnus operating table, and associated products (such as the Maquet Moduevo ceiling supply units, soon to be installed). The OR was officially opened on Tuesday 20 June 2017 by Frédéric Pette (acting president, surgical workflows, Getinge) and by Heinrich Kolem (president, advanced therapy, Siemens Healthineers)

Pette comments: “With Siemens Healthineers, we have a partner that has enabled us to upgrade our Hybrid OR with the latest robotic C-arm on the market. The combination of ARTIS pheno and Maquet Magnus is taking imaging to a new level. And this is just the beginning. Our strategic partnership will lead to more innovative solutions in the near future.” 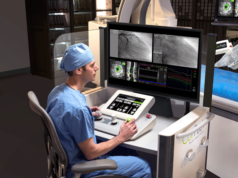 COVID-19: Robotics may help to reduce exposure to virus patients during interventional procedures