Data from an international registry of patients undergoing a procedure known as BASILICA, which is intended to prevent coronary obstruction during transcatheter aortic valve implantation (TAVI), show that the technique is safe, with low stroke and death rates, and feasible, with high procedure success and low coronary artery obstruction rate.

Coronary artery obstruction occurs in around 0.7% of TAVI cases, the study’s authors suggest, and is associated with around 40–50% mortality. BASILICA—bioprosthetic or native aortic scallop intentional laceration to prevent iatrogenic coronary artery obstruction—is a transcatheter electrosurgical procedure performed immediately before TAVI in which catheters and guidewires are used to first traverse, then lacerate, the aortic leaflet in front of the threatened coronary artery to preserve coronary perfusion.

The study’s authors note that, to date, safety and feasibility data on the technique in a large patient cohort is lacking, and they therefore sought to determine the safety of the procedure through the International BASILICA Registry, a retrospective, multicentre, real-world registry of patients at risk of coronary artery obstruction undergoing BASILICA and TAVI.

A total of 214 patients from 25 centres in North America and Europe were included in the study between June 2017 and December 2020. Of these, 72.8% had bioprosthetic aortic valves and 78.5% underwent solo BASILICA.

The authors note that leaflet traversal was successful in 94.9% and leaflet laceration in 94.4%. Partial or complete coronary artery obstruction was seen in 4.7%. Procedure success, defined as successful BASILICA traversal and laceration without mortality, coronary obstruction or emergency intervention, was achieved in 86.9%. Thirty-day mortality was 2.8% and stroke was 2.8%, with 0.5% disabling stroke.

Thirty-day death and disabling stroke were seen in 3.4% of patients. VARC-2 composite safety was achieved in 82.8%. One-year survival was 83.9%. Outcomes were similar between solo and doppio BASILICA, native and bioprosthetic valves, and with the use of cerebral embolic protection.

The findings led the study team to conclude that BASILICA is safe, with low reported rates of stroke and death, and is feasible in the real-world setting, with a high procedure success rate and low rates of coronary artery obstruction.

Speaking during his presentation of the results at CRT, Khan said: “This is the largest registry of the BASILICA procedure and it demonstrates, in our view, that BASILICA is safe, with low rates of stroke and death; feasible in the real world with high rates of success and low rates of coronary artery obstruction. The reassuring data should facilitate wider dissemination of the BASILICA procedure at high-volume centres.” 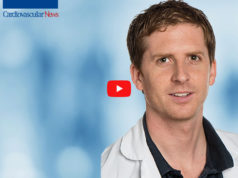