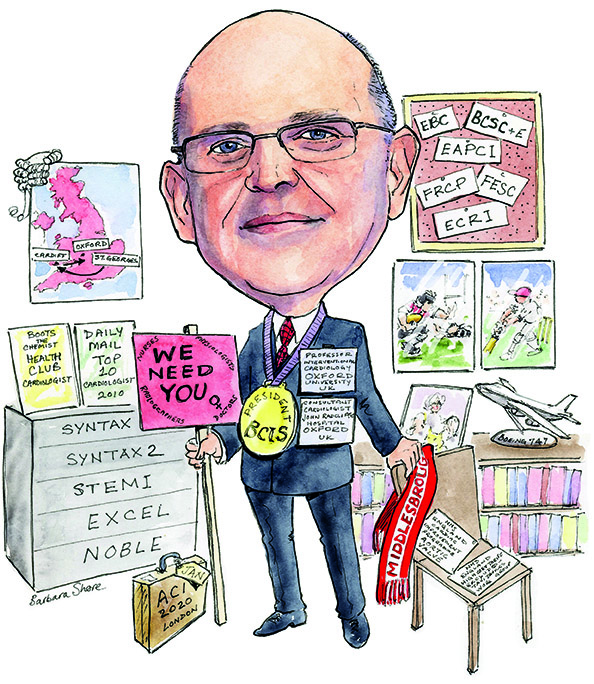 Adrian Banning (John Radcliffe Hospital, Oxford, UK) initially wanted to fly a Boeing 747 but, aged nine, decided go into medicine instead. He talks to Cardiovascular News about his involvement in both the SYNTAX and the SYNTAX 2 trials, his work in myocardial injury after stenting, and his interest in left main intervention. He also discusses the work of the British Cardiac Intervention Society (BCIS) and the need for better stents/therapies for diabetic patients.

I wanted to be a doctor from about age nine. We have no medics in the family but we had a general practitioner come to talk to my fellow students and I at primary [elementary] school. After he left, I told my parents that was what I wanted to be. At medical school, I was initially interested in paediatrics but once I did cardiology, I knew was it my favourite.

My first exposure to interventional cardiology was a revelation. As interventional cardiologists, we get to make the diagnosis, confirm it with imaging and/or physiology and in many cases provide treatment—with stents or valves. That is very unusual within medicine to be responsible for the whole pathway of a patient’s care; it is a real privilege.

My first boss was Charles Pumphrey at St Georges (London, UK) and I learnt a lot from Roger Hall and Liam Penny in Cardiff (University Hospital of Wales, Cardiff, UK). I was really inspired by my first trip to the Transcatheter Cardiovascular Therapeutics (TCT) meeting (in Washington, DC, USA), and I decided that I would like to perform educational live cases. When I hosted and performed live cases (from Oxford, UK) during the 2010 TCT meeting, I fulfilled an ambition!

What has been the most important development in interventional cardiology during your career?

I can remember the first coronary stent implantation in Cardiff (UK) in 1993. Martin Rothman (previously the London Chest Hospital, London, UK) came to Wales to perform the procedure; 8F guide from the femoral artery on warfarin/aspirin/dipyridamole and dextran infusion. The patient was an inpatient for five days afterwards, so things have moved on a lot since then! Clearly stents were initially amazing, but then drug-eluting stents seemed revolutionary when they were introduced. More recently, transcatheter aortic valve implantation (TAVI) has transformed our valve practices—especially now that we are using local anaesthesia and TAVI has become a truly percutaneous technique.

What has been the biggest disappointment? Something you hoped would change practice but did not?

I am pleased to say that there have not been too many disappointments. My centre (Oxford, UK) was a major recruiter for the SYNTAX trial, and I remember being disappointed when the one-year results were presented and showed that percutaneous coronary intervention (PCI) was inferior to coronary artery bypass grafting (CABG). However, we went on to recruit the first patient in the EXCEL trial—we ended up recruiting more than 100 patients for the study in Oxford—and I was delighted when improved PCI technologies and techniques meant that, for the first time, the data showed PCI and surgery to have equivalent outcomes (for left main disease).

You have done substantial work in myocardial injury after PCI. What have been your key findings?

We showed that troponin elevation following stent implantation meant that myocardium was injured and we could not just ignore it. I think understanding this has given us insights into prevention of myocardial injury and this has improved safety and outcomes for patients.

You were the co-principal investigator of SYNTAX 2. What insights did this trial provide in terms of how PCI should be performed?

This trial used a contemporary approach to assessing multivessel disease by combining the use of physiological assessment with a pressure wire and intravascular ultrasound (IVUS) to confirm optimal stent deployment. Together with a third-generation drug-eluting stent, we showed that our outcomes are much better than those we achieved in the original SYNTAX trial. We also showed that at two years post-procedure, outcomes with PCI are equivalent to CABG. The “take-home” message is to treat obstructive lesions that are causing ischaemia carefully and effectively, but leave areas of incidental, nonobstructive atheroma alone.

I am still interested in left main and bifurcation intervention, and I am also interested in optimising reperfusion in ST-segment elevation myocardial infarction (STEMI). Our outcomes with stents are good for most patients, but I think there is more we can do for a sizeable minority. We need to identify the patients that are not going to do well with a standard approach at an early stage. We can then find and offer novel therapies that will help. At the moment, we are looking at PICSO (Miracor Medical), which is a coronary sinus device that seems to reduce final infarct size based on our initial non-randomised studies (performed in Oxford, UK).

Given the good outcomes we have seen with current generation drug-eluting stents, have we reached a plateau in terms of improving safety and efficacy with the latest generation stents?

I think the adverse outcomes that occur following stenting are more predictable than many people think and that we still need to improve our technique. Better stents/therapies for patients with diabetes are an unmet need.

As president of the British Cardiac Intervention Society (BCIS), what are your goals for the society? What were the highlights of this year’s meeting?

We had three sessions of live coronary cases, which were excellent. The debates caused a lot of discussion, especially the topic of angiography in patients without ST-segment elevation who present with an out-of-hospital cardiac arrest. On a personal level, I was particularly pleased with the session on helping to attract more women into careers in interventional cardiology. It was the fulfilment of a year’s project within this area and the presentations and the session were inspirational and thought-provoking.

What impact do you think Brexit will have on the field of interventional cardiology in the UK?

It is very hard to say. In my opinion, there are lots of potential downsides and not many possible gains to Brexit. Interventional cardiology is a worldwide community and I certainly would not want anything to isolate the UK from our friends and partners in Europe. I am part of the steering committee of the European Bifurcation Club—I hope they won’t throw me out  after Brexit!

What was your most memorable case?

Oliver Ormerod (Oxford, UK) and I implanted the first unprotected left main PCI in Oxford in 1995. The patient had a blocked right artery, and I remember the uncertainty about what would happen when we blew up the balloon and stent. Fortunately, the patient did very well and it prompted an interest in left main intervention that I have pursued since then.

What advice did you receive at the start of your career that you now pass on to those whom you mentor?

I am not sure I had too much initial advice from others, but I have learnt that interventional cardiology is hard work and you have to be dedicated, persistent and inquisitive. Reflecting on procedures that do not go so well is really important because adverse outcomes will happen sometimes, and we should try to see if there are things we can do better next time.

What is your view of #CardioTwitter and its potential advantages/disadvantages?

I think I am probably a bit too old to really embrace Twitter! But, the potential is extraordinary. We hope to make bigger use of Twitter at ACI in January 2020—I think I will have to get some youngsters to help me!

What was your childhood dream job (does not have to be a realistic one!)?

Other than medicine, I was intrigued by the law and being a barrister. When I was tiny, I fancied being a Boeing 747 pilot.

My wife Anne and daughters Amy and Eve are obviously a huge part of my life—together with Daisy the dog. I enjoy sport, English rugby and cricket. I am a long-suffering fan of Middlesbrough football club. TCT 2019: Apixaban plus a P2Y12 inhibitor is the optimal strategy for AF with ACS and/or PCI